Over the last 450 – 500 million years, plants have evolved complex ways to transport information within and between cells. Phytohormones are the signalling molecules produced within plants and are used to transmit messages across the entire organism. Signalling can occur locally within a plant or between different plants, including different species (Toyota et al, 2018). Despite occurring at low concentrations, phytohormones exhibit strong control over many aspects of plant biology, through either negative or positive regulation. This can include roles in germination, pathogen defence, stress tolerance and metabolism. In animals, hormone production is limited to specialized glands (e.g. insulin produced in the pancreas). However, all plant cells are able to produce phytohormones.

Where are they found and what do they do?

There are eight major phytohormones which have multiple functions and roles in plant biology. Auxin, discovered in 1928 by Dutch scientist Frits Warmolt Went, is one of the most important, contributing to repair mechanisms, root and fruit growth. Its importance is demonstrated below which shows reduced growth for a mutant plant created by removing an important auxin gene (Gray, 2004). It has also been shown that high concentrations of auxin can lead to the production of ethylene which is important for fruit ripening and shoot growth. Found in the tissues of ripening fruits and leaves, ethylene has been shown to stimulate leaf senescence (the process of deterioration with age) and induce root growth during flooding. 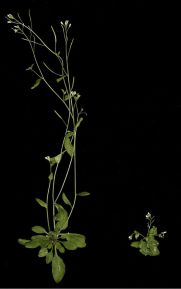 Abscisic acid (ABA) is the most important phytohormone for my PhD. This is because ABA is most commonly associated with drought stress and has been shown to be involved in important water preservation mechanisms such as closure of stomata (below), leaf shedding and bud dormancy. ABA is also known to be involved in further responses to environmental stress, including freezing tolerance, heat stress and heavy metal tolerance (Zhang et al, 2005).

The evolution of phytohormones

The transition of plants from aquatic to terrestrial environments is arguably the most dramatic development in evolutionary history. Mentioned at the top of this article was the fact that phytohormone signalling has been evolving for at least 500 million years. It has recently been recognised that the predecessors of land plants acquired the mechanisms for adaptations to land far early than previously thought (Hori et al., 2014). These would have included hormone signalling, high intensity light and desiccation tolerance. Further studies have found evidence that the signalling of cytokinins, ethylene and abscisic acid was present in the ancestor of streptophytes, a group consisting of land plants and their closest living relatives, charophyte algae. The last living ancestor of all green plants would likely have been able to produce many of the major phytohormones (Bowman et al., 2017). Upon adapting to land, plants evolved to allow for more specific responses to everything from growth to tolerance to drought.

If you want to learn more:

View all posts by sciencesnippets1